A next-to incomprehensibly condensed summary from a recent workshop

I have been using the phrase 'gathering the fragments of the enactment' for many years, and many of you have asked me to give more detail - here finally is 'another fragment'.
I'm grateful to the students on my recent teaching touring in Pakistan, as well as all the tutors and assistants present, who helped me sharpen, simplify and clarify my attempts to formulate the bodymind phenomenology of enactment, and how - in the therapist's stream of consciousness - we try to catch our involvement in the enactment, by what I have been calling "gathering the fragments" (I wrote about this as a meta-principle for the first time in very abstract form in 2005 in the chapter on "Embodied countertransference", and have been experimenting with various formulations on "Steps towards apprehending the bodymind phenomenology of enactment" meant to be helpful in practice, in supervision and in the writing of session notes).

The conundrum of enactment as the paradoxical heart of therapeutic action, from a thoroughly two-person psychology perspective, requiring surrender to the vortex of enactment whilst maintaining a curious attentiveness and awareness to the here & now process of losing the therapeutic position and 'going down the plug-hole', has been described by the question/metaphor: how can the eye see itself?
Because being caught in the enactment structures our way of perceiving and looking and therefore how we 'see' the other through the lens of the enactment, through a looking glass darkly and opaquely, through our various affectively charged projections, transferences and countertransferences. We can know implicitly that we are caught in enactment, even when we are clueless as to what it is, and we can have a sense of its intensity long before we can formulate a reflexive thought or image. But we can surrender to our stream of consciousness with some degree of awareness, and perceive and 'catch' charged bodymind fragments, even as we are bewildered. The following are some comments written up from a part of the workshop where we focused on the 'gathering of the fragments'.

What does it mean: to gather the fragments of the enactment? What are the underlying principles of 'gathering the fragments'?

How is Countertransferential Enactment Worked Through? - Steps towards an embodied-relational answer 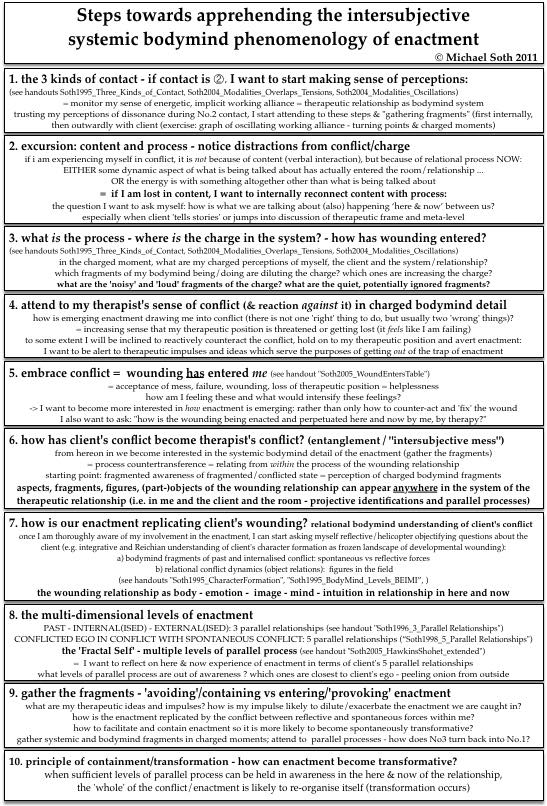 The phrase 'gathering the fragments' did not fall out of the sky - like all precious ideas it has a genealogy of elders, in this case, it is derived from the following song, from a book I read in the late 1980's "Daughters of Copper Woman" by Anne Cameron. 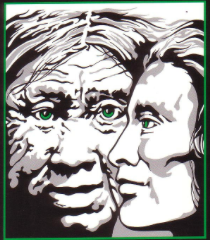 • “do you simply mean bringing the enactments into our awareness?” -  basically, yes;  however, in practice there are some complications to this:

•  to begin with, the enactment is largely unconscious;  definitely for the client,  but usually in large degrees also for the therapist -  so how do we become conscious of the unconscious? How do we bring awareness to what is outside awareness?
•  I use the term ‘fragments’,  because (as it says in the blog post):
•   the way character defences work in bodymind terms is by fragmenting what might otherwise be a more whole, coherent and comprehensive experience -  subjectively, rather than experiencing myself as a whole in a particular body-mind-psyche-feeling state,  my experience is split into fragments,  with some of these fragments repressed and dissociated, i.e.  inaccessible to my awareness and therefore unconscious. That’s the whole point of defences,  in simple terms: that I don’t get to fully feel what I’m actually feeling
•  rather than having a ‘whole’ bodymind experience, in which my body sensations, my emotions, my imaginative mind and my reflective mind all cohere together,  I am landed with a collection of fragments,  some of which I am aware of, some of which I can become aware of and some of which I’m habitually unaware (roughly equivalent to Freud’s distinction between conscious - pre-conscious and unconscious)
•  so that fragmentation of experience applies to both the two people’s psychology involved in therapy: client and therapist;  each of them is only partially aware of themselves and of the other, i.e.  they only have awareness in the stream of consciousness of fragments of themselves and of the other
•  enactments occur outside awareness between these two wounded and defended fragmented people,  and have the power to draw awareness to the fragmentation  with its inherent wandering which can thus  potentially become transformed through enactment -  i.e. fragmented states can transform into a sense of wholeness through becoming aware of enactments ( so rather than Freud’s “where Id was there Ego shall be” = making the unconscious conscious,  we are formulating it as a two-person psychology process where it’s not just the client who is unconscious and not just the therapist who makes things conscious
•  as I said above: if both people are  in degrees unconscious, and are both unconsciously perpetuating enactment and  caught in it,  gathering the fragments is - simply - about bringing awareness to the enactment
•  in this process, one of the most difficult and complex questions is the role of the body and the mind (or better: the  relationship between spontaneous processes and reflective processes) and what the mind can contribute to gathering the fragments (taking into account that historically the assumption was that it is purely the conscious/rational mind that does make things conscious and makes meaning,  by reflecting on bodymind experience -  but that dualistic assumption doesn’t work very well)
•  so then we need to pay attention to how the ego-mind  is involved in the therapeutic relationship (both the client’s and therapist’s),  taking into account that the original function of the defensive ego is to avoid and defend against pain, by keeping experience fragmented -  so how does a defended ego ever become conscious and gather the fragments of enactment?  It goes against the grain of the defended ego to experience wholeness, because wholeness would include the wounding,  and the purpose of the defended ego is to avoid the wounding (both the client’s and therapist’s)

•  so if we fully accept this conundrum for both client and therapist that in degrees they are both unconscious and defended against the very self-actualisation and wholeness which we intuit as a transformative possibility,  then what does that mean in the nitty-gritty of our stream of consciousness when we are trying to work as therapists?
•  in our stream of consciousness, how can we attend to both emergent wholeness as well as habitual defences in both people? (rather than assuming that it is the client who is defended and the therapist who wants to bring about wholeness)
•  the first thing we need to do is identify moments of intensity and significance when we have a sense that enactment is more active and constellated (i.e. by tracking and monitoring the three kinds of contact)
•  when we feel the working alliance is wobbling,  which means that an enactment is brewing, we then need to start gathering the fragments of enactment
•  whenever we role-play client-therapist interactions, we go through that process together in selecting charged moments,  which we then play out in order to maximise our awareness of all the bodymind levels of the interaction
•  the preparatory questions for the weekend (questions in red in the last email)  were meant to generate that kind of material
By MM|2019-01-26T11:49:02+00:00August 26th, 2018|General Blog Posts|0 Comments

This site uses Akismet to reduce spam. Learn how your comment data is processed.